(This subject is collaboration study with Prof. Akimitsu ISHIHARA in IAS, YNU)

The residential fuel cell system was first commercialized in Japan in 2009 known as “Ene-Farm”, and more than 300,000 units have been installed. The market for fuel cell vehicle (FCV) was also opened in 2014, and more than 4,000 FCV are running on roads today. In addition, more than 130 hydrogen refueling station have been established so far (2020). As shown in figure below, Polymer Electrolyte Fuel Cell (PEFC) system is applied to both Ene-Farm and FCV. However, it is concerned that the cost of electrocatalyst would occupy 50 percent of the total if the high-volume manufacturing of PEFCs is continued by status technology. The conventional catalyst of PEFC is a platinum (Pt) categorized as precious metal. Pt is very high-cost material and found in a very limited region. Moreover, it is recently reported that the performance of Pt is limited in principal. Therefore, we focused on non-precious metal oxide-based materials that are abundant in resources, with low cost and high stability. Our research has been started since 2000 to apply such materials to electrocatalyst of air electrode that usually have a great energy loss. 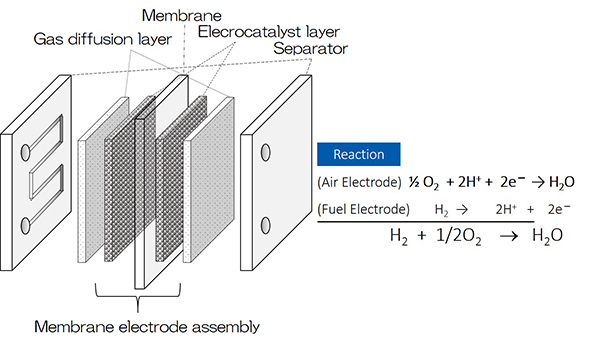 The technology of water electrolysis has been expected to play a key pole in “Green hydrogen” production without any CO2 emission in its process. Especially, an Alkaline Water Electrolysis (AWE) as shown in figure below has been used to produce hydrogen industrially for long time, and its system has been widely commercialized in the world. In addition, the AWE is promising system for “Green hydrogen” production in a large scale. Conventionally, the AWE has operated by rated power supplies. In near future, the AWE will be operated by the renewable energies such as solar and wind powers. Such power systems will not be able to provide stable supplies because they are heavily influenced by weather conditions that are constantly changing. In other words, “Green hydrogen” will be produced by fluctuation power supplies. It is recently reported that the nickel, the electrocatalyst of AWE, can be degraded in operation by variable renewable energy (VRE) because the catalytic activity of oxygen evolution reaction became lower in the potential cycle simulated VRE. Thus an alternative anode material must be developed in order to apply AWE in producing Green hydrogen. In this regard, we have focused on the oxide-based electrocatalysts with abundant resources and high stability in alkaline solution. We tried to apply them for candidates for the anode material of AWE.

Polymer Electrolyte Water Electrolysis (PEWE) as shown in figure below is a partly commercialized water electrolysis. Compared with AWE, the PEWE has an advantage in its compact system as well as its production of high-purity hydrogen, and may be able to apply as a distributed system, especially, for the large-scale production of “Green hydrogen”. The electrolyte of PEWE uses proton exchange membrane that is also in PEFC. It also has the property of a similar structure of PEFC, though the reaction is reversible to the PEFC. Precious metal-based materials that are used both in conventional electrocatalysts of PEFC and PEWE, and iridium oxide is used in the anode of PEWE. Iridium is a by-products of platinum and is a scarce in the world. As the commercialization of PEWE is in progress, the prices of the raw material as well as the system may rise. Therefore, our focus is on non-precious metal oxide-based materials that are abundant in resources, with low cost and high stability to use them for the electrocatalyst of anode of PEWE.